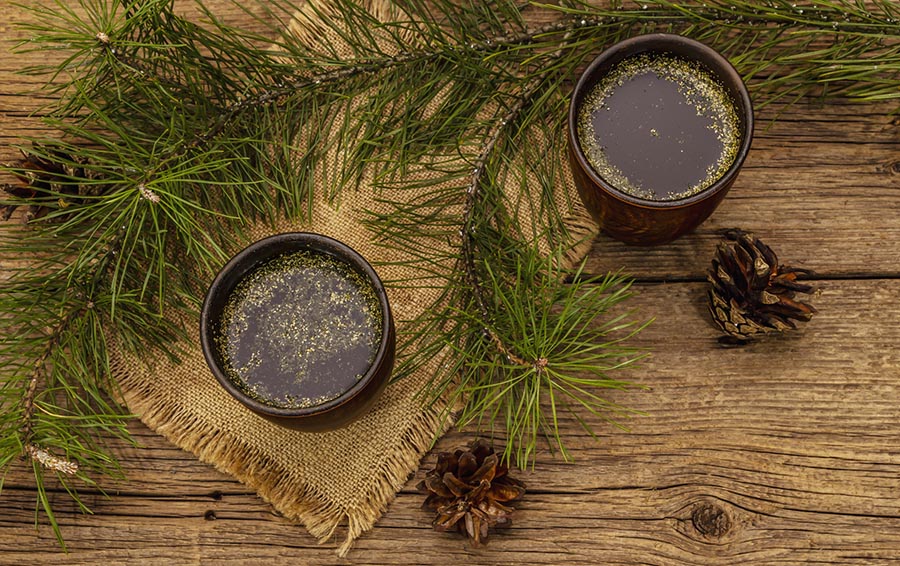 Word is spreading that pine needle tea may offer a solution against covid vaccine “shedding” or transmission, which appears to be a phenomenon where vaccinated people are spreading harmful particles or substances to others around them.

There is a potential antidote to the current spike protein contagion which is called Suramin. It’s found in many forests around the world, in Pine needles. Suramin has inhibitory effects against components of the coagulation cascade and against the inappropriate replication and modification of RNA and DNA. Excessive coagulation causes blood clots, mini-clots, strokes, and unusually heavy menstrual cycles.

Pine needle tea is one of the most potent anti-oxidants there is and it’s known to treat cancer, inflammation, stress and depression, pain and respiratory infections. Pine tea also kills parasites.

Below, find a full podcast and video that reveals two extraction methods, both of which are simple, low-tech, low-cost methods that can be used almost anywhere.

Fresh pine needles from appropriate trees have been used for centuries as sources of vitamin C and other phytochemicals that Native Americans used to treat respiratory infections and other ailments. Vitamin C is a known cure for scurvy, as scurvy is a disease of vitamin C deficiency. Pine needles contain many other substances that appear to reduce platelet aggregation in the blood, potentially preventing blood clots that lead to strokes, heart attacks and pulmonary embolism diagnoses. (See published science sources below.)

Pine needles have been used by indigenous populations around the world as both food and medicine for thousands of years. Many people now believe pine needles may be able to offer protection from covid spike proteins — which are engineered bioweapons found in covid vaccines — as well as covid vaccine “shedding” particles, which also appear to be biological weapons designed to achieve global depopulation.

Dr. Judy Mikovits asserts that globalists are well aware that pine needle tea is the answer to covid depopulation weapons, and they are secretly using pine needle tea to protect themselves from the very plague they have unleashed upon the world, Mikovitz explains.

Digging into the science behind pine needles and covid

As a published laboratory scientist, I decided to dig into this question with the help of my laboratory knowledge and experience. Boiling fresh pine needles in order to make a tea is an extraction method that’s commonly used in food science as well as Traditional Chinese Medicine (TCM).

Water acts as a solvent, and through heat and time, some phytochemicals in the pine needles are extracted into the water, making a pine needle tea. (This is how all tea is made.)

As I poured over the published science research on this topic, I had two primary questions:

1) What molecules are found in pine needles, and what are their functions in relation to halting blood clots or protecting the unvaccinated from covid vaccine shedding?

Through research, I found that pine needles not only contain suramin, a large molecule that’s touted for various medicinal effects, but also shikimic acid.

Shikimic acid is the basis for Tamiflu, and it’s the molecule found in Chinese Medicine herb Star Anise, that cures plagues

The Boston Herald published a story in 2010 that revealed researchers were studying extraction techniques to harvest shikimic acid from pine needles in order to provide this raw material to the pharmaceutical industry to manufacture anti-viral, anti-flu, anti-pandemic prescription medicines. From that story:

Researchers at the University of Maine at Orono say they’ve found a new and relatively easy way to extract shikimic acid — a key ingredient in the drug Tamiflu — from pine tree needles.

Shikimic acid can be removed from the needles of white pine, red pine and other conifer trees simply by boiling the needles in water, said chemistry professor Ray Fort Jr.

But the extracted acid could be valuable because Tamiflu is the world’s most widely used antiviral drug for treating swine flu, bird flu and seasonal influenza. The major source of shikimic acid now is the star anise, an unusual star-shaped fruit that grows on small trees native to China.

The research has been funded from a variety of sources, including the Maine Technology Institute, the U.S. Department of Agriculture, the National Science Foundation and the university’s chemistry department.

Shikimic acid, when separated by HPLC, exhibited a dose-dependent inhibitory effect on platelet aggregation induced by adenosine diphosphate and collagen in rabbits. Because of the relative high content and good antiplatelet-aggregating activity of shikimic acid, the Masson pine needles can be used as a potential source of shikimic acid.

…achieved about a 6% yield of shikimic acid from Masson pine needles, which is possibly the highest extracted yield from any pine species till now (Chen et al. 2014). Since pine needles are inexpensive and readily available in North Asia, North America, and Europe, there is a strong possibility to utilize them as a drug manufacturer against less available star anise species

That study found that pine needles provide about two-thirds the shikimic acid of star anise herb:

So we know that pine needles, which are extremely common across North America, China and Europe, provide shikimic acid, a kind of “miracle” molecule that may prove incredibly useful for halting blood clots and defending people from respiratory infections.

Further research led me to a study that used neural networking research to optimize the extraction conditions in order to carry out a highly efficient extract from pine needles: 17 Optimization of Extraction Conditions of Shikimic Acid in Pine Needles Based on Artificial Neural Network.

That study offers the following recipe for extraction optimization:

This finished “tea” should be filtered through a coffee filter or other paper filter in order to remove large particles. The resulting liquid will contain shikimic acid, suramin, pigments and various terpenes, and will typically show some coloration and have a rather pungent taste.